A visit to Auschwitz-Birkenau Concentration Camp in Poland prompted this wunderkammer (cabinet of curiosities).

I never imagined a muskrat would be as plush and soft as this accidentally trapped “survivor.”  Its remarkable elegance is a stark contrast to the grotesque context in which it is presented.

The German Third Reich diabolically cast Jews as rats, the ubiquitous vermin infiltrating their “clean, pure” Aryan society with filth, disease, plague and lies.  The Jew as the parasite of humanity. A thorough and successful propaganda campaign including the 1940 film Der Ewige Jude (The Eternal Jew), easily sold the Reichstag on utter extermination as the only and final solution, now known as the Holocaust.  The demonic mastermind behind the program was Joseph Goebbels. This curiosity shelf includes its own model can of Zyklon B, the rat poison ironically used in the shower/gas chamber for the actual extermination process. It’s difficult to see the barbed wire around the bottom of the shelf, but I saw plenty at the camp.

An infamous scene in Der Ewige Jude  showed swarms of rats scurrying through cellars and sewers; the shots are intercut with images of Jews emigrating to all corners of the world.  The overlaid text conveyed this message:

Where rats turn up, they spread diseases and carry extermination into the land.  They are cunning, cowardly and cruel, they travel in large packs, exactly the way the Jews infect the races of the world. 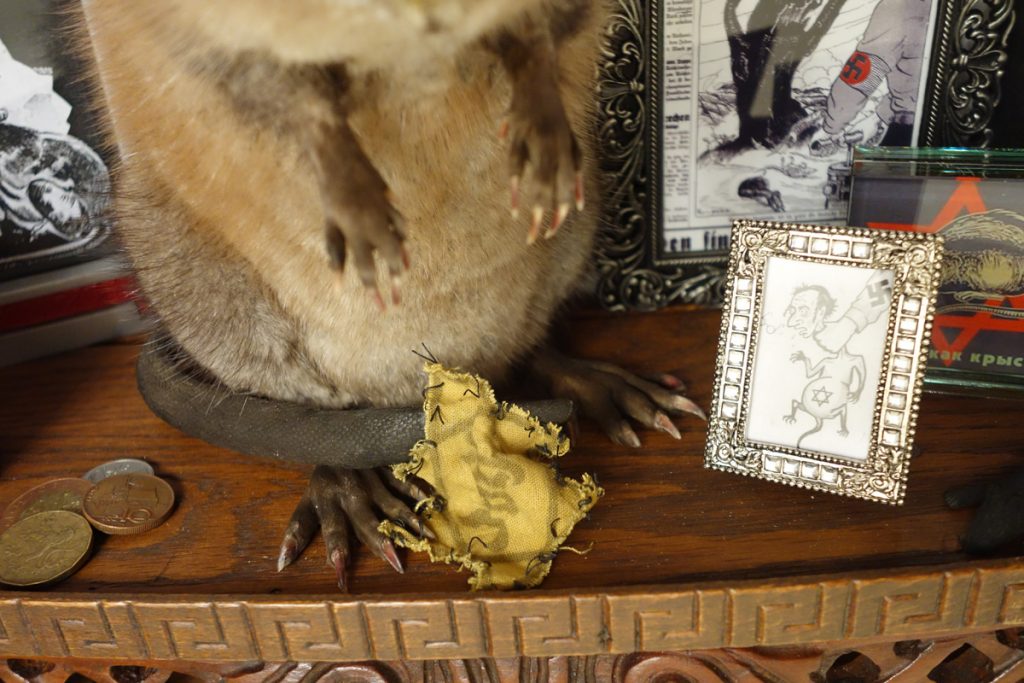 Seen here are Czech coins (symbol of all Jewish possessions despised by the Nazis) and a model of the Jewish Star of David, required accoutrements for all Jews in Nazi occupied territory. This one displays JUIF, the French translation of JEW. 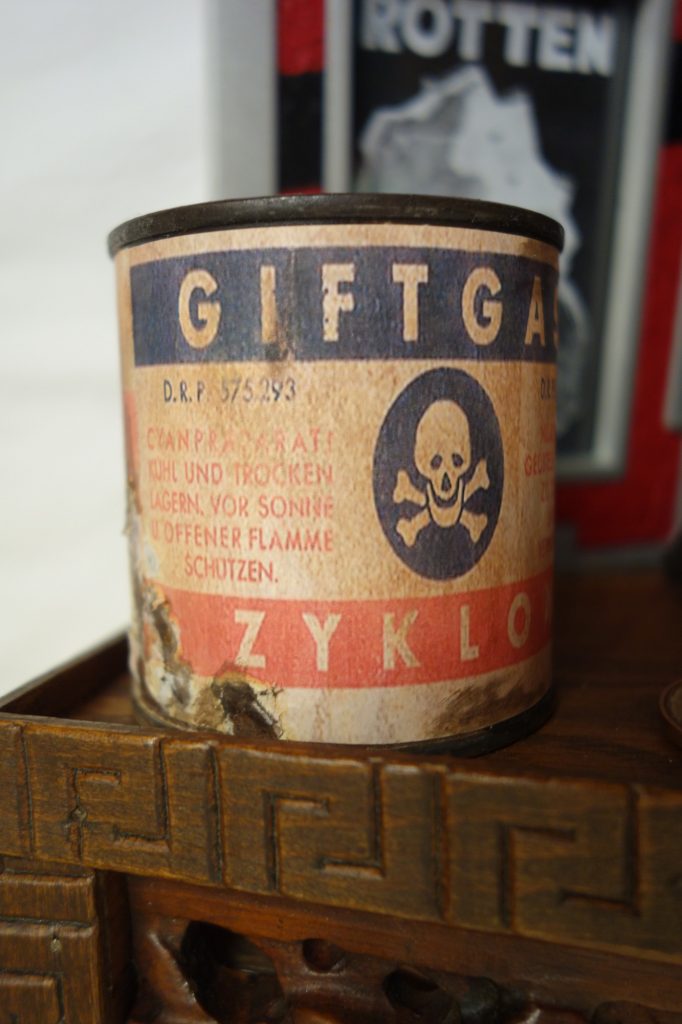 Model can of Zyklon B, a cyanide-based pesticide invented in Germany in the 1920s. The preferred killing tool of Nazi Germany, the chemical was used in Auschwitz II-Birkenau crematoria to immediately gas those Jews not selected for work crews (generally three-quarters of the total, including almost all children, women with small children and the elderly). The pellets were dumped through vents in the roof of the chambers (all doors or windows had been bricked over) and the victims were dead in 20 minutes. Johann Kremer, an SS doctor who oversaw gassings, testified that the “shouting and screaming of the victims could be heard through the opening and it was clear that they fought for their lives.” On my visit to this camp, I could easily see the victims’ scratch marks in the walls. The victims’ glasses, artificial limbs, jewelry and hair were removed, and any dental work was extracted for the gold to be melted down. Nazi officials used this gold to fund escape after liberation. The corpses were burned; there rained a constant stream of grey ashes in the area. 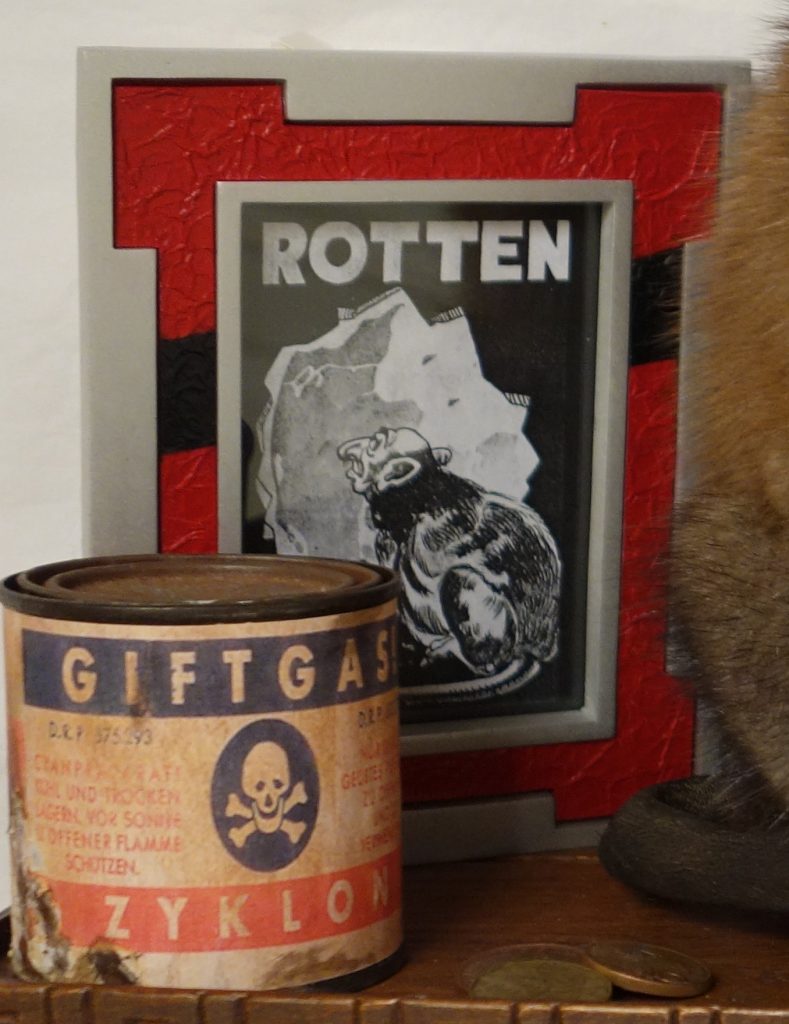 A 1940’s poster from occupied Denmark states: RATS. Destroy Them. 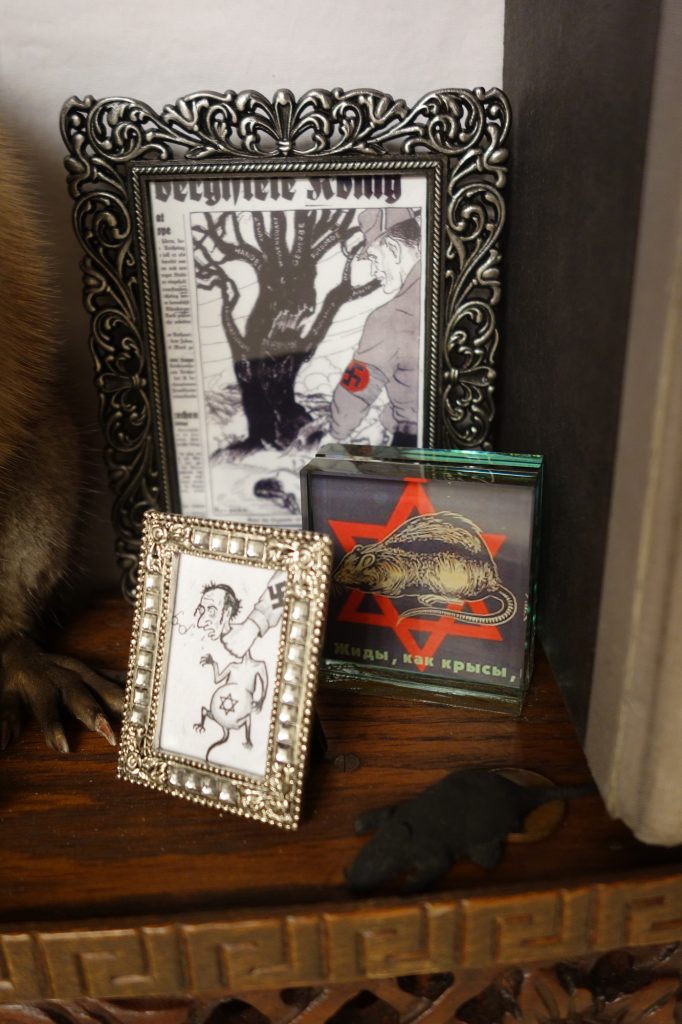 1. Der Stürmer (The Stormtrooper) was a German publication known for its unrelenting anti-Semitism. The caption for this December 1927 issue is: When the vermin are dead, the German oak will flourish once more. A Nazi is pumping poison gas into the base of a tree, with dead rats representing Jews around the tree. The rats are labeled stock exchanges, the press and trusts. The branches of the tree, labeled Germany, are industry, agriculture, commerce, the arts, business, the sciences, social welfare, civil service, and workers. This might be the earliest Nazi image suggesting poison gas as a way of exterminating Jews, though a reference to that possibility is made in Mein Kampf.

2. The small Russian poster of a rat in the Star of David says, Jews are the rats that will destroy your nation.

3. The small comic depicts the Jew as a cowardly, scurrying rat being strong-armed by an heroic National Socialist marching into Finland. Original source unknown. 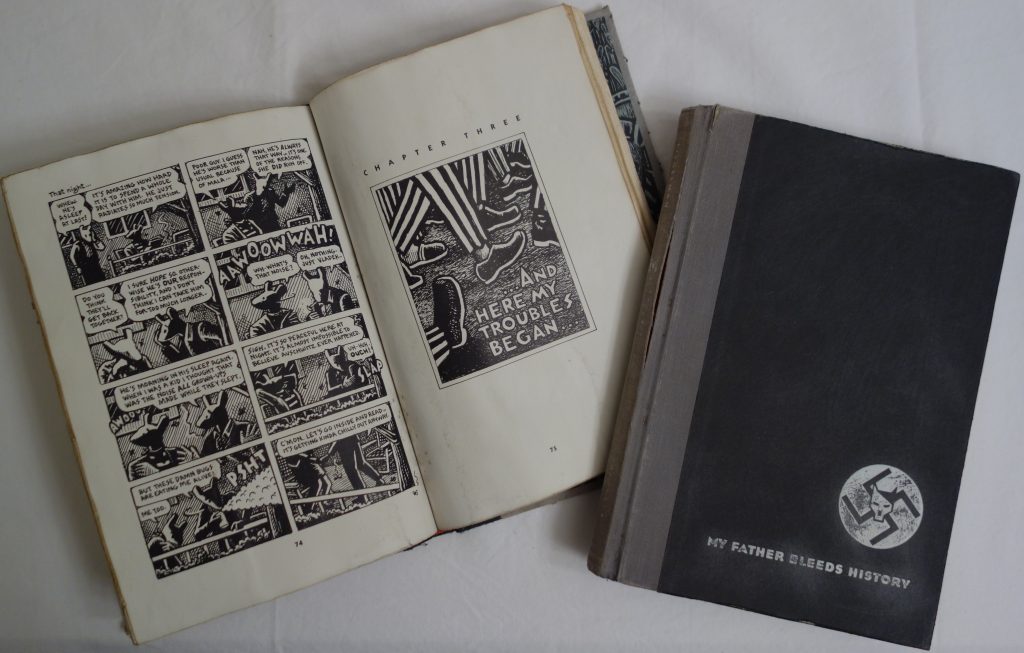 The two texts are the 1992 Pulitzer Prize winning MAUS, the only graphic novel ever to win a Pulitzer, by Art Spiegelman. It employs postmodern techniques to tell the story of Spiegelman’s father, Vladek, and his experience as a Polish Jew during the Holocaust, confronting the terrifying reality of the systematic genocide of millions and millions of Jews (and others) carried out by the Nazi regime. MAUS was the subject of a retrospective at the Museum of Modern Art in New York City (1991-92). The critic Arlene Fish Wilner explained, “In the Jewish tradition, the transmission of familial and communal history from parent to child is a sacred obligation.”